Book review: When We Were On Fire 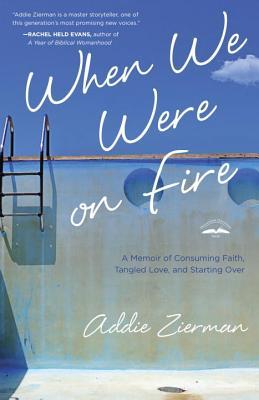 When We Were on Fire: A Memoir of Consuming Faith, Tangled Love, and Starting Over

Having grown up in the evangelical world, gone through youth groups, rallies and missions trips – and with my personal faith journey changing and evolving still to this day – I was eager to dive into When We Were On Fire, a memoir of an “evangelical survivor.”

After the first couple chapters, I was worried this would just be overtly critical and cynical without offering any real critique. Instead, I was pleasantly surprised to find it much more on the “show” side than “tell,” taking the reader through the author’s journey through evangelical obsession, gradual disillusion, spiritual exhaustion and eventual depression, and then slowly reconstructing her faith and her relationship with the faith community.

I especially admired that she didn’t place the final blame on church culture (although it appeared that way throughout most of the book), but rather shared her story honestly and vulnerably. That’s why I gave it five stars. This journey was her story, and it was a true experience. As it says on the back of the book, “It’s a story for doubters, cynics, and anyone who has felt alone in church.”Here’s an excerpt from my favorite chapter (21).

“Being born again. The marriage of the most natural and messy of human processes with the spiritual. This idea that before This Moment was dark and muffled, and now you have emerged into brightness. Clarity. Joy and understanding and light.

“Yes, faith is like being born again. But it is also not like being born again. Unlike the newborn infant, the new Christian has memory that spans back into the darkness from which he came. He is not so much born as waking every moment to new realities. To a new way of looking at humanity. It is not Before and After, a clean split. It is gradual illumination, softening the edge of darkness so that you can see the beautiful mystery around you.

“You think about the void between the phrase ‘born’ and ‘born again,’ and it occurs to you that this story is too big for all of these words. The Christian-y ones that have been used so badly. Take the word ‘saved.’ It’s true you are saved by grace, by love, by light…but it’s only half the story. The truth is that there is so much that you’re not saved from. You are not saved from pain or loneliness or the bite of reality sharp against your skin. You tell people you are lonely, and they say ‘Let God be your friend,’ or they say ‘What a friend we have in Jesus’ – and what you hear is that you don’t have the right to be lonely, that if your faith was stronger than this, bigger than this, you would be happy.

“And it occurs to you that the real work of faith has nothing to do with saying the right words. It has to do with redefining them, chipping away at the calcified outer crust until you find the simple truth at the heart of it all: Jesus.