Storytelling inspiration from the big screen.

I’m both excited and terrified to announce that I’m breaking ground for my next novel. While I had the story in my head for more than a year, I had yet to actually begin any work. What does that mean? It’s time to hit the story board.

The biggest technique I strive to follow in my writing is the age-old principle of “Show, don’t tell.” Oh, what a timeless and tricky technique that is! I’ve recently been looking to filmmakers and screenwriters as my storytelling inspiration, specifically those who wear both the writer and directer hat for the same film – perhaps the best way of capturing the writer’s original vision. In the book Writing Movies: The Practical Guide to Creating Stellar Screenplays, the Gotham Writers’ Workshop team describe it as such:

“Film is a visual medium. That’s the first thing you need to know. In prose, it’s all about the words. In film, the image dominates. Reading prose fiction is largely an internal experience; we slip into the minds of the characters and envision our own pictures from the words. In film the reverse is true. We experience a movie from the outside in. We ride along with the visuals and they lead us toward our inner thoughts and sensations and emotions.”

Just look at the visual direction in this sample screenplay: 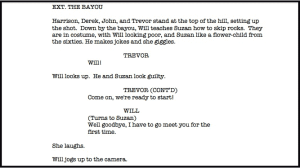 Three artists in particular have produced some amazing low-concept stories (a genre I write within) that capture the human experience by showing, not telling:

What non-book mediums do you look to for creative inspiration? Why?

4 Comments to “Storytelling inspiration from the big screen.”